“When music is in your blood you just keep doing it.” So says Bruce Farquharson who has been involved in Nanaimo’s music scene since 1977. Upon arriving in town Farquharson was installed as Musical Director of the Nanaimo Tidesman Barbershop Chorus, leading the group for 7 ½ years. He sang in the Malaspina Choir in the early 1980s and became a member of the Nanaimo A Cappella Singers which morphed later into the A Cappella Plus chamber choir. During the ‘80s he was Vocal Director for 4 Nanaimo Theatre Group musicals and taught Choir and Musical Theatre classes at Nanaimo District Secondary School for a couple of years. In the early ‘80s he also took up the trumpet (studied with James Somerville and Al Matheson) and joined the Nanaimo Concert Band, becoming the Musical Director from 1993-1995.

The stage has beckoned several times, so that Farquharson has provided on-stage folk guitar accompaniment for Spoon River Anthology. He studied voice for three years with Sharon Wishart and has sung in local productions of Gilbert & Sullivan, The Gondoliers (the Duke) and The Sorcerer’s Apprentice (the Vicar) as well as playing the part of Arthur Sullivan in “An Evening of G&S”.

In 1989 Farquharson became Musical Director of A Cappella Plus and stayed for 14 years, guiding the group through classical, folk and jazz repertoire before retiring in 2002. In 2000 he took up the cello and was a student for eight years at the Nanaimo Conservatory of Music, under Joyce Menting, Jennifer Moersch and Paula Kiffner. He is a founding member of the Nanaimo Chamber Orchestra and continues as cellist and Board member. 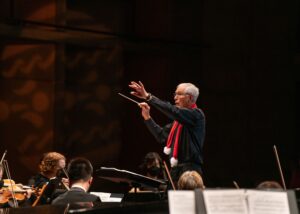 In 2007 Farquharson started up the Island Consort chamber choir with an emphasis on excellence and Early Music. Due to his liasion with the Nanaimo Chamber Orchestra he has been able to, on occasion, gather string players to accompany the choir, giving even greater substance to the repertoire. His latest adventure, August, 2012, was to study symphonic conducting with Don Schleicher, Kirk Trevor and Tomaš Netopil at a 2 ½ week workshop in Kromeriz, Czech Republic.