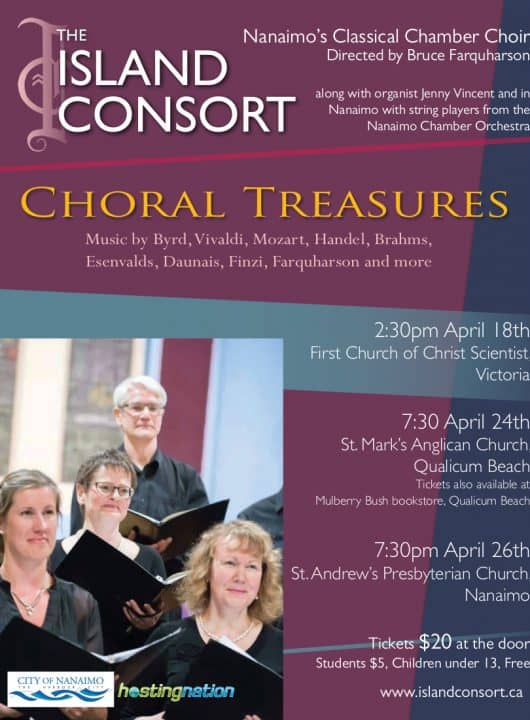 With the arrival of April and its sense of renewal, the Island Consort Chamber Choir finds partnership in the vitality of Spring – performing a stimulating and emotive program: Choral Treasures. These Treasures express and endearingly celebrate a broad range of our “human condition”. The concert begins with William Byrd’s 16th century “Ne Irascaris/Civitas”, one of his Jerusalem motets based on the poignant words of Psalm 137. Vivaldi’s “Credo RV591” based on the Nicene creed follows and then Mozart’s “Sancta Maria Mater Dei” and “Laudate Dominum” – for soprano solo + choir. Two more classics lead to Brahms’ “Lass Dich Nur Nichts” (Geistliches Lied, Op.30) and Handel’s “Zadok the Priest”, written for the coronation of King George II.

The rest of the concert features music of the 20th and 21st centuries, including the premiere of a new piece, “Requiescat”, written for the choir by Director, Bruce Farquharson, based on a poem by Oscar Wilde. Two pieces deal with light: Latvian, Eriks Esenvalds’ “Stars” – with accompaniment by wine glasses, and Norwegian, Ola Gjeilo’s “Northern Lights”. Next is French Canadian, Lionel Daunais’ “Figures de Danse” based on a fantasy of circus performers. Next, is the familiar “Danny Boy”, the lyrics put to Percy Grainger’s “Londonderry Air”; then Gerald Finzi’s “Haste On, My Joys!” set to a poem by Robert Bridges. The concert ends with “An Irish Blessing” – May the Road rise to meet you. . . . .

There will be strings for the Nanaimo concert, as well as organ and piano accompaniment for some of the pieces – string players from the Nanaimo Chamber Orchestra plus keyboard work by Jenny Vincent. The Island Consort will be performing this program April 18th in Victoria, and then at 7:30 pm April 24th at St. Mark’s Anglican Church (Qualicum Beach) and April 26th at St. Andrew’s Presbyterian Church (Nanaimo). Admission is adults $20, students $5 and under 13, free at the door. Website: www.islandconsort.ca